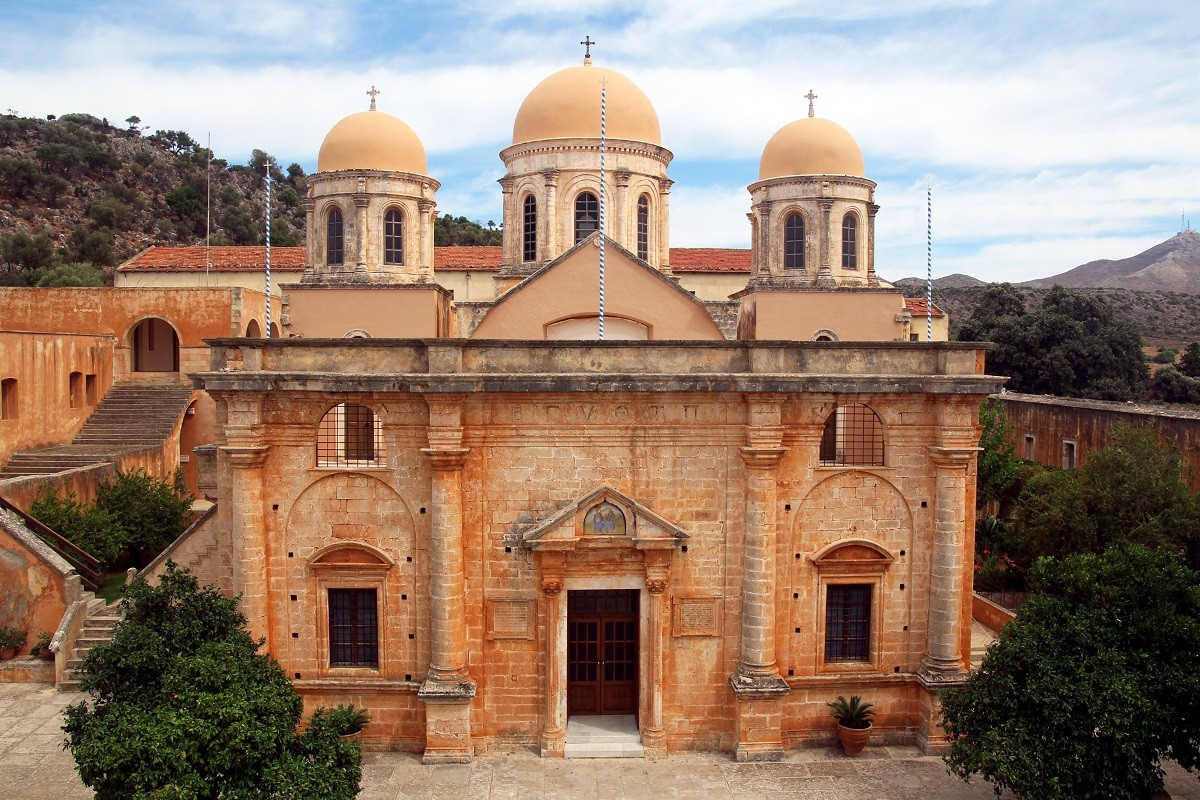 The monastery of Agia Triada of Tzagarolon is one of the richest and most beautiful monasteries in Crete. It is very close to the airport of Chania on the foothills of Stavros Mount. The distance from Chania is only 15km. The monastery was built by the Venetian Jeremiah and Lawrence Tzagarolo. Jeremiah was a famous scholar of his era with rich education and was a friend of the Patriarch of Alexandria, Meletios Pigas. Jeremiah himself was a candidate for Patriarch of Constantinople. Moreover, Jeremiah designed and built the monastery complex of the monastery, influenced by the architect Sebastiano Serlio from Verona, Italy. The monastery today hosts a small museum with various pictures and icons. The most important are the 12th century cloth for covering the altar, the icons of St. John the Theologian (16th century), St. Nicholas (17th century) and the icons of the painter Skordilis: the Enthroned Christ, Living Spring and the Second Coming (1635-1645). Today, after the numerous historical adventures, the monastery continues to play an important role in the religious and economic life of Crete. It is Stavropegic, which means that it is managed by the Ecumenical Patriarchate of Constantinople. Visitors will see an well - preserved and vibrant monastery that produces and exports organic olive oil, wine, honey, vinegar and olive oil soap of unique quality.

The monastery complex is quadrilateral and fortified, with a rectangular inner courtyard, while the imposing temple of the Holy Trinity stands at the middle of the yard. The complex hosts several auxiliary facilities such as the olive oil mill, the wine press, the wine cellar, a huge tank for storing rainwater, stables, etc. Moreover, there is a large dining room, a library with very old books (here was the old abbey), the monks' cells, the newer abbey, an ossuary and a small chapel dedicated to Christ. The entrance of the monastery is impressive and here stops a road with huge cypress trees. At the end of the road, you will see a grand staircase and the entrance to the monastery. The facade is built with strict geometry, with features of Renaissance architecture and some subsequent additions.

The most impressive building of the monastery is certainly the church of Agia Triada (Holy Trinity), in the center of the courtyard. It belongs to the "three niche" architectural style, with a dome and chapel on the ground level and the upper level. The ground plan follows the typical "Agioritiko" tradition (Athos Monastic style in North Greece), while the morphological elements can be linked to western ecclesiastical architecture. From the original decorations only the icon screens from the ground floor chapels were saved, while the icon screen, icons and the general equipment of the church dates from around the middle of the 19th Century. The gold-plated woodcut icon screen is an exceptional interest piece due to its pictorial construction which followed the Cretan traditions of its era, with evidence of Baroque influence. Most of the icons on the icon screen can be credited to the known artist of the time, Mercurios from Santorini, who followed the style of the post-Byzantine technique.

16th century: The monk Joachim Sofianos owns the small monastery of Mourtari dedicated to the Holy Apostles, in the position of the current Agia Triada Monastery.

1611: The monk of the Monastery of Agia Kyriaki, Jeremiah Tzagarolos, undertakes the reconstruction of the former monastery by building the new Agia Triada Monastery.

1634: Jeremiah dies and his work is carried on by his brother Lawrence.

1821: During the Great revolution of 1821, the monks manage to leave the monastery, but the Turks destroy and burn it and its valuable relics.

1830: The Turks grant permission for the completion of the temple to the monks Kalliopios and Gregorios. The Monastery is eventually constructed! From there on, it acquires a huge real estate and many smaller monasteries as dependencies, even in Smyrna.

1864: The imposing bell tower of the temple is added.

1892: A seminary (Theological college) starts its operation at the east wing of the monastery, operating for many years till 1905.

1896-97: In the last Cretan revolution before the liberation of 1898, the monastery is converted into a hospital and military headquarters.

1941: In the Second World War, the monastery is used by the Greeks for storing supplies for the Navy. The Germans destroy part of the monastery.