The Lagoon of Balos 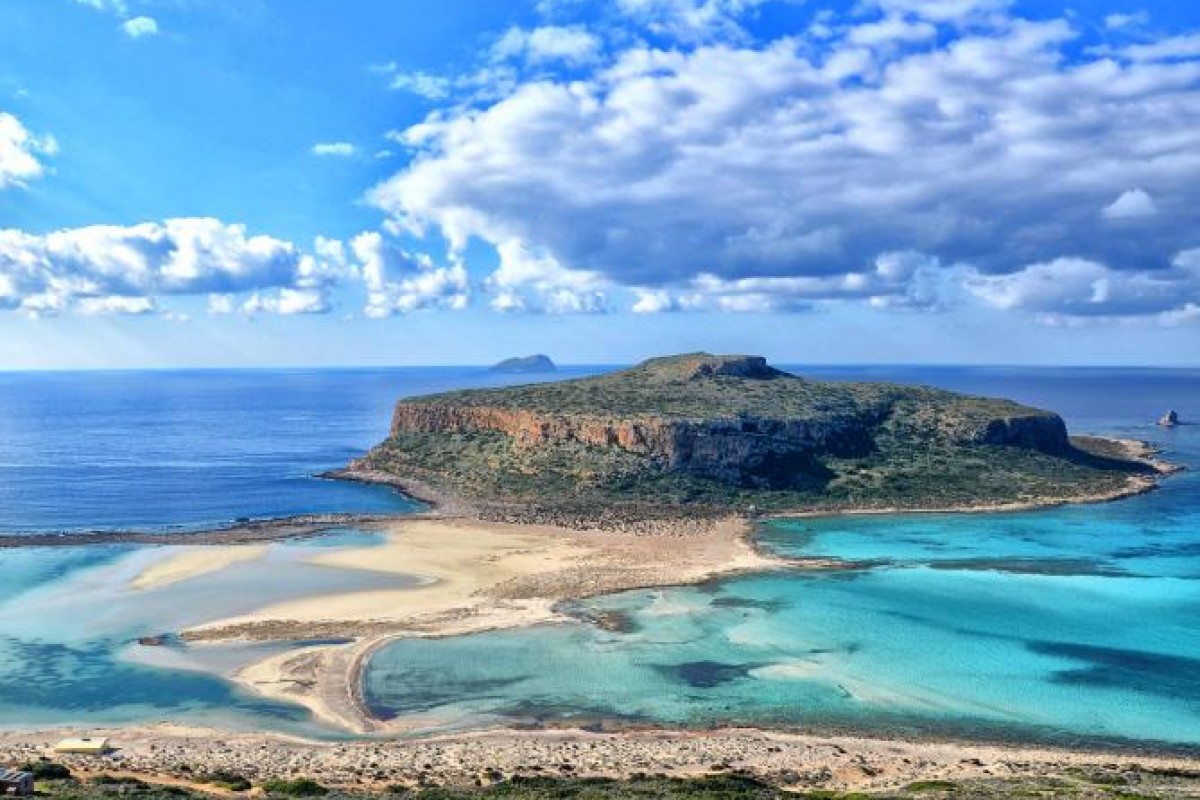 The famous lagoon of Balos is located approximately 56km northwest of Chania and 17km northwest of Kissamos, formed between the Cape Gramvousa and the small Cape Tigani and below the range of Platiskinos. Balos is surely the mostly photographed beach in Crete, a very favorite subject of all tourist guides for Greece. It is no coincidence that Prince Charles and Princess Diana visited Balos with their private yacht many years ago. Balos is famous for its turquoise waters, the wild natural beauty and the beautiful exotic scenery. During the summer, Balos is visited by thousands of people, who arrive mostly by the ferries running from Kissamos port. If you do not like crowds, you’ d better avoid to visit the beach in July and August. The lagoon of Balos has white sand and exotic white, vivid blue and turquoise waters. The sea is very shallow and warm, ideal for young children. In many places the sand has a lovely pinkish color, because of millions of crushed shells. Beyond the rocks at the boundaries of the lagoon, the water is deeper and colder, ideal for a snorkeling. The lagoon and the wider area, with rare species of flora and fauna, are protected under the Natura 2000 program. Eleonora falcons, shags and cormorants nest in the caves of the area. Moreover, the area is a shelter for the protected ‘Monk Seal’ and the ‘Loggerhead Sea Turtle’ (Caretta caretta).

Some drawbacks of the lagoon is that the seabed is muddy and the shallow waters facilitate the growth of microorganisms, which sometimes cause an unpleasant smell. Lastly, the locals say that the sea currents transfer rubbish or tar to Balos.

You can go at Balos with the morning ferry leaving daily from Kissamos (around 25 to 30 Euros).  You'll have the chance to see the wild shores of Gramvousa and the marks from their lifting up for 6-9m after a strong earthquake in 365AD. If you're lucky, you might be accompanied by dolphins. Furthermore, the ferry will leave you for a swim in the exotic beach of Imeri Gramvousa islet, where you will see the old fortress and the wrecked ship. Do not forget to wear a hat and have plenty of water with you. If you come in Balos, you can visit the small chapel of Saint George located in Tigani. At Tigani, you could also visit the large cavern where many women and children were slaughtered during the Turkish massacres in 1825. The Christians were hiding in the cave, but the Turks soon discovered their shelter, thus killed them all. There is a commemorative sign at the site where the bones of the victims were found. Also, north of Balos, in Cape Korykon there are remains of the small Roman town of Agnio with the temple of Apollo. Today, there is the picturesque chapel of Agios Sostis.