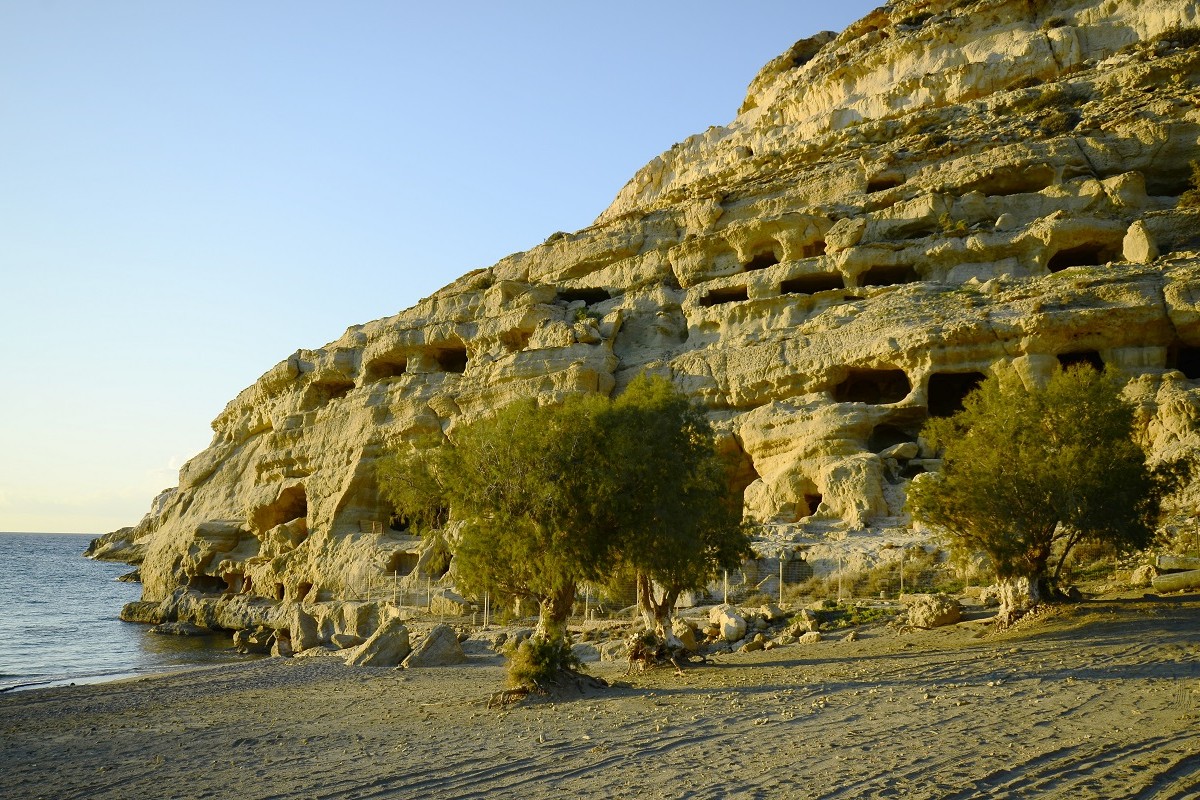 Matala is located 68km southwest of Heraklion, where the Messara plain meets the mountains of Asterousia. This is one of the most popular tourist destinations of Crete and certainly the most famous beach of south Heraklion prefecture. It is famous for the carved caves in the rocks and the hippies of the ‘70s. It is located close to Phaistos, the second largest palace of the Minoan civilization. Matala served as a port of Phaistos, and on the Roman Times, it became a port of Gortys.

Matala is located at the exit of a small valley, which forms an enclosed bay with nice view to the Paximadia Islands.There is a beautiful sandy beach, 300m long, with fine gravel and crystal clear deep waters. Τhe seabed is quite rocky in some places (especially in the central part of the bay) and waves are common, due to frequent west winds. Furthermore, there is a huge cave on the north part of the beach from where some people dive. The beach is very well organized with umbrellas, toilets, showers, lifeguard, first aids, beach volley courts, snack bars, a camping site, etc. Around Matala you will find many options for accommodation, entertainment, cafes & restaurants. Also, a large part of the beach is covered by tamarisk trees, where you can find shade. In the evenings, the bars on the beach are full with many people, both locals and tourists. Matala every June hosts the international Matala Festival, gathering many thousands of guests during the festival .

THE HIPPIE CAVES OF MATALA

The most famous feature of the area are the many graves from the Roman and early Christian era, carved in the soft white limestone thousands of years ago in the northwest walls of the bay. There are several underwater caves, as well. Many of them have rooms, stairs, beds or windows, suggesting that they were once used as residences. The hippies of the '60s and '70s found their paradise in these caves, when they visited and stayed in Matala. Hippies expressed themselves freely, enjoyed love and creation. The hallmark of the hippies was the two fingers of victory, followed by the slogan «Peace Man». Around that time there was absolutely nothing in the area, but a small fishing village for the inhabitants of Pitsidia village, so the sense of freedom was unlimited. Matala became so popular with hippies that attracted several celebrities such as Joni Mitchell, Bob Dylan, Janis Joplin and Joan Baez. However, all that stopped abruptly during the Greek military dictatorship the ‘Chounda’ in the ‘70s, when the local Church expelled the "shameful" hippies. Then the “children of the flowers” moved to other regions of Crete (Preveli, Plakias, Lendas, Vai etc), but most of them moved in Ios island, in Cyclades, and continued their happy life there. From that point on Matala was abandoned for a long time and then the Archaeology society sealed the area with the caves. In recent decades, the area is under a rapid development and does not remind anything of the atmosphere of the past. Today you will see thousands of people, enjoying swimming on the beach, surrounded by modern hotels and talking about the lost past times. The caves are open to visitors with a small admition as an archaeological site, but it is forbidden to stay there and overnight.

Along the coast there are more natural caves, which are accessible by boat. Moreover, many archaeological sites and shipwrecks have been found in the surrounding area. The Cape south of Matala is believed to be the Cape Nysos, i.e. the point where the ships of Menelaus were wrecked (according to Odyssey). Southeast of the village, there are ruins of an ancient temple, and near the beach, a marble urn has been excavated. Do not forget that Matala was the port of Phaestus and Gortys. So ruins of the ancient sunken city have been found in the sea and some small mansions nearby. Furthermore, on the opposite side of the village, over the hill of Kastri, there are ruins of a fort, named Koules, and the ruins of a beacon, a place with fire for signaling over land when enemy troops were approaching. Finally, in a cave nearby, you can visit the old church of Virgin Mary, which was used as a catacomb during the Christian persecutions. All of this historical and natural heritage helped to protect the region to put it under the international program of Natura 2000.