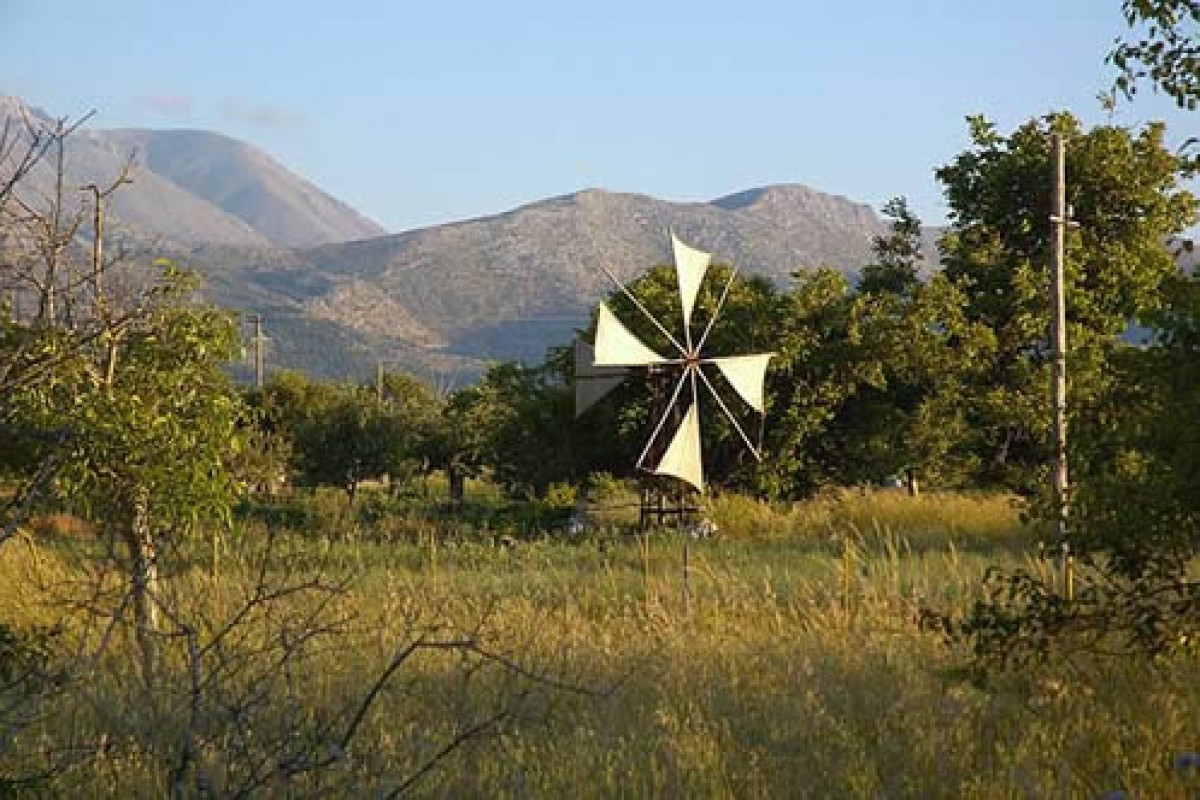 The wonderful Lassithi Plateau is located about 70km west of Heraklion city. Located in a peaceful and fertile region and it is surrounded by the wild mountains of Dikti and several smaller plateaus. The views of the surrounding mountains are majestic. The altitude ranges from 800 to 850m, making Lassithi one of the few residential areas in the Mediterranean at such high altitude. Indeed, every year the plateau is covered by snow and then thousands of Cretans arrive to admire the white landscape. In most years, snow remains in the mountain peaks until mid-spring end of April. The 18 villages of the plateau are built at the foot of the surrounding mountains, leaving the plains free to cultivate, and they are connected by a 23km long circular road. Actually, this beautiful circular route is ideal for those who love cycling as there are no large hills and, along this, you will have the chance to visit all the attractions of the plateau.

Lassithi plateau is famous for its windmills with white cloths, a trademark of the area. These were water- and flourmills, made in late 19th century, to irrigate the plateau. Unfortunately, today young people have abandoned their homeland because the Greek state does not provide incentives, and the villages look deserted, with elderly population. Thus, the landscapes of 12000 whitewashed windmills, which once drew water from wells to irrigate cultivations, can be now seen on old card postals. But still, you can see several windmills, since many of them have been restored in the last years. Moreover, at the entrance of the plateau, at position Ambelos, we still see the largest stone windmill park in Greece. The 24 mills of Seli Ambelos is the largest stone windmill cluster in Greece. Another attraction of the plateau are linies, ie the linear drainage projects that were built by the Venetians to transport water across the plateau. When the Venetians conquered Crete, they turned Lassithi to the largest “garden” of Crete, which still supplies Crete with excellent quality potatoes and vegetables. On a walk at any point of the plateau, you will find linies i.e. large ditches carrying water. Within a short distance from the village of Agios Konstantinos and the nearby artificial reservoir with the goldfishes, you will meet the imposing and rugged canyon of Havgas, carrying the water of the highest Katharo Plateau in Lassithi. The plain is crossed by the Great River that leads water into a large sinkhole, ‘Honos’, on the opposite side of the plateau, from where it finds its underground way to Aposelemis River through the springs of Fleges (by village Kastamonitsa). Honos is full with water till spring and you can visit it next to Kato Metohi. Next to the village of Agios Konstantinos it is worth visiting the historical Monastery of Kroustalenia (Our Lady Crystal - 16th century), built on a lush green hill, which played an important role in the Cretan revolutions against the Turks and was destroyed twice in 1823 and 1867. On the other side of the plateau, you will find the restored Monastery of Vidiani (1841), where a small museum of natural history is operating. In Agios Georgios village, you can visit the Museum of Eleftherios Venizelos and the Folk Museum. Moreover, it is worth visiting the small Plateau of Nisimos (next to Tzermiado) and visit the Church of the Holy Cross or walk to Karfi Minoan settlement, atop a towering rock called the seat of Ariadne. From there, overlooking the northern coasts of Crete is shocking. Another plateau that you can also visit is the small plateau of Limnakaro, near St George with the beautiful woods of walnut and the chapel of the Holy Spirit. Lastly, you can visit the plateau of Katharo (easily accessed from Kritsa) where paleontologists found traces of elephants. If you visit Lassithi in summer, you can take part in the local festivities of "Potato Day" in Tzermiado, the "Festival of the marrow" in Avrakonde, the "Day of Baking Bread" in Kato Metohi, etc. Furthermore, every year the local authorities organize the international "Diktaean Games” (long distance running), in which athletes run around the plateau (23km). Finally, the most important attraction of Lassithi is the Cave of Psychro, near the homonym village. Mainly known as Diktaeon, the cave has played an important role in ancient times, due to a myth that put the birth of Zeus here. Also another myth states that inside that cave, Zeus mated with Europa, who gave birth to Minos, the King of Knosos. In the village of Marmaketo, there is the smaller, but still significant cave of Trapeza, known as the Cave Kronio.

Lassithi Plateau was cultivated by the Minoans and is considered the last bastion of resistance of the Minoan culture against the Dorians, who arrived in Crete in 4th century BC. This amazing place was linked to the most important story of the Cretan mythology, namely the birth of Zeus, but also the conception of Minos. Also, it was told that the fair King Minos received the orders of Zeus every nine years there, before turning them to laws for his people. There are some other smaller myths, like the ugly winged Harpies who lived here. When the worship of Zeus was moved to the Ideon Andron in Mount Ida, the plateau began losing its religious significance and was forgotten for centuries. The name was then Dikti. Much later, when the Venetians occupied the island, they initially banned habitation, because the secluded plateau could protect the rebels. So the plateau was deserted until some Venetian families arrived in Crete from Peloponnese, when they gave life to this barren place. To do this, the Venetians made a huge range of drainage works, linies, in order to drain water from the surface and enrich the underground aquifer. At that period Lassithi was then turned to a fertile paradise. Linies, which are still visible, separated the plateau in 193 squares, which were offered as sharings to the new families. These sharings in Venetian were called lassiti or Lasciti, giving their name to the region.

THE BATTLE OF LASSITHI

During the Turkish occupation, the plateau was an important site of resistance against the invaders. The most important event that took place ever here, was the giant battle of Lassithi (May 1867). After the holocaust in Arkadi (1866), the rebels fled in Lasithi. The Turkish-Egyptian army, having 25000 soldiers and being led by Omer Pasha, arrived on the mountains (from the side of Kastelli), where they met fierce resistance from the Cretans. However, the small number of Greek armed men was not able to keep the Turks away, so they managed to enter the plateau. The rebels fled to the surrounding mountains and the unlucky locals were slaughtered and their villages were being completely destroyed for ten days. The Monastery of Krystallenia was also totally destroyed. For ten days the Turks destroyed everything, until the rebels regrouped in the small plateau of Limnakaro. Omer Pasha learned about that and moved his army there. However, the rebels managed to maneuver and descend to the valley. So when the exhausted Turks returned to the Plateau on May 19, they clashed with the rebels near the village Marmaketo, where they were defeated. The ten-day Gigantomachy of Lassithi, as it is called, in conjunction with the other revolutions in the island, was a step for the liberation of Crete. The ferocity of the Turks forced the (up to then) neutral European Countries to demand from the Ottoman Empire to declare Crete autonomous. Indeed, in honor of the contribution of the Battle of Lassithi in the Liberation of Crete, the Prefecture of Sitia was renamed to the Prefecture of Lassithi, a name that lasts until to the present day.