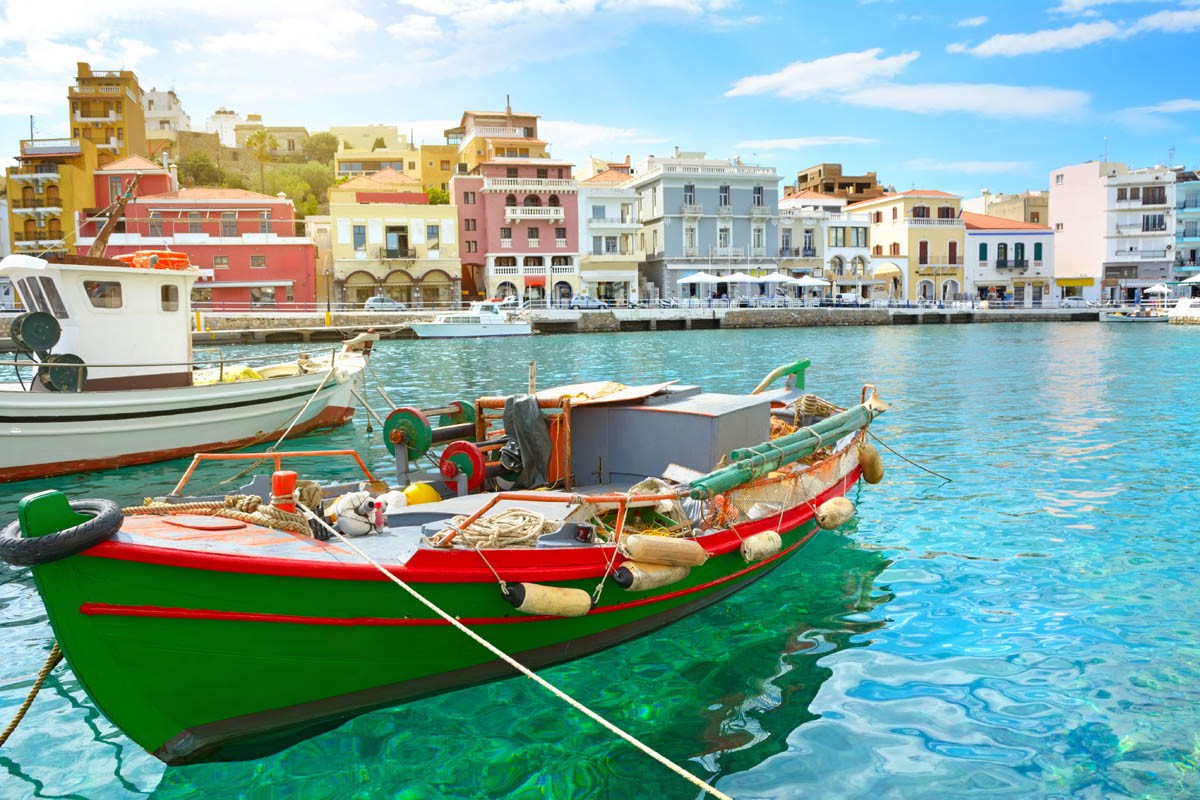 Our drive today covers a large part of the northeastern axis of the island. Our first stop is the lovely serene little town of Agios Nikolaos.

It is the cosmopolitan capital of the prefecture of Lasithi. The town is built on the west side of the Gulf of Mirabello, but the current name comes from the Byzantine church of Saint Nikolaos located west of the city. Here was the site of the Minoan "Lato pros Kamara", the seaport of Lato town near Kritsa. Later, in the Byzantine era, it was known as the Diocese (Episkopi) of Kamara, but was never developed. Because Venetians never gave importance to the region, Agios Nikolaos was not fortified and remained a small fishing village until when the capital of Lassithi was moved here (early 20th century). Since then, the city transformed into a picturesque resort with the main pillars of development being its tranquility and the beautiful beaches. Trademark of Agios Nikolaos is the picturesque Lake Voulismeni, a small lagoon in the center of the town, used as a small harbor where fishing boats stop. Many legends are associated with it, mainly because of its very deep waters (e.g. that it has no bottom). A walk around the lake is a very nice experience indeed.  Other sights of Agios Nikolaos include the neoclassical buildings, the marina (the first marina in Crete), the island of All Saints (Agoii Pantes) where many endangered Cretan wild goats are protected, squares with taverns and the pedestrian road with many cafes. Moreover, you'll be impressed by the stairs that are almost everywhere, as the city is built in an area with very steep slopes and roads could not be constructed.  As we continue on the coastal road towards the north, we come to the village of Elounda, Elounda is located north of Agios Nikolaos. Elounda was once a picturesque fishing village in the lovely Mirabello Bay. The inhabitants lived from farming, fishing, salt extraction from the Venetian saltpans, and emery mining. In the hills around Elounda is found a mineral unique to Greece, “akonopetra” or whetstone, a type of fine emery used to make whetstones and emery paper to hone tools used in many different jobs. Once discovered by tourism, Elounda developed into a resort famous for its beautiful scenery and the luxury hotels which are still being built in the area. It is said to be the place with the most five-star hotels in Greece.  From the small port of the village we will board a small traditional wooden boat which will take us to the Island of Spinalonga. The islet of Spinalonga is located at the north entrance in the Gulf of Elounda, The fortress of Spinalonga is kept in a good condition. In recent years, local authorities have been trying to enter Spinalonga to the UNESCO World Heritage Sites. The ancient name of Spinalonga was Kalydon, but after its seizure by the Venetians, the name changed. In addition, the name of the Olus city is linked to a second version of the name “Spinalonga”. The castle-fortress on the island which was built to protect the harbor of the ancient state Olus. Olus was deserted in the 7th century, because of Arab invasions in the Mediterranean Sea, until the middle of the 15th century when the Venetians took advantage of this area and started gathering salt. Consequently, the area gained significant value as a center of trading and it was systematically reoccupied. Moreover, the Fall of Constantinople in 1453 made the Venetians fortify the island. On the ruins of the ancient castle, the Venetians built a strong fortress (1579-1586). During the Venetian occupation, the fort was used for military purposes. During the Cretan War, refugees and rebels (Hainides) resorted to Spinalonga. By having the island as a base, they harassed the Turks. Their action lasted as long as the Venetians held the fortress, since in peace treaty of Chandax it was stated that Spinalonga will remain in the domain of Venice. Turks occupied the island of Spinalonga in 1715 and gradually many Ottoman Turks resided there. In the late 19th century, political developments and Christians’ revolutionary actions forced Ottoman inhabitants of Spinalonga to emigrate. Since 1897 and for about a period of a year, French military forces have been barracked in Spinalonga.

In 1903, the Cretan State decided to create a Leprosarium in Spinalonga in order to provide a concerted aid to those suffering from Hansen’s disease. In 1957, the Leprosarium closed since the lepers were healed because of the discovery of antibiotics and thus the island was finally deserted. The Island is one of the better-known features in Crete and location of the top-selling novel ‘The Island’ (author Victoria Hislop). After your visit in Spinalonga you can take the boat and go to the village of Plaka. Opposite the northernmost point of the Spinalonga peninsula and its fortified islet, lies the fishing village of Plaka. Plaka is famous for the sea front restaurants with a breathtaking view to Spinalonga.

• On route we can visit the Archaeological site of Malia, 3 kms east of the modern town of the same name. Malia was an important Minoan town with a palace equivalent in size to those of Knossos and Phaestos, but not so grand. The first palace was built around 1900 BC, was destroyed around 1700 BC, following which a new one was built. However, around 1450 BC, this new palace suffered the same fate. The ruins to be seen on the northwestern side, belong to the old palace, while the remainder of the ruins belong to the new palace.

• At a short distance from Agios Nikolaos lies the picturesque village of Kritsa. Kritsa is built amphitheatrically on a hill. It is renowned for the quality of its hand woven articles.

• In order to reach the island of Spinalonga guests have to take a small wooden boat from the port of Elounda, a cost that has to be covered from our guests.

• Many different options can be included in the basic program if requested, like: the village of Kritsa, a famous and awarded olive oil factory, a small fabric which make natural cosmetics from Cretan herbs etc