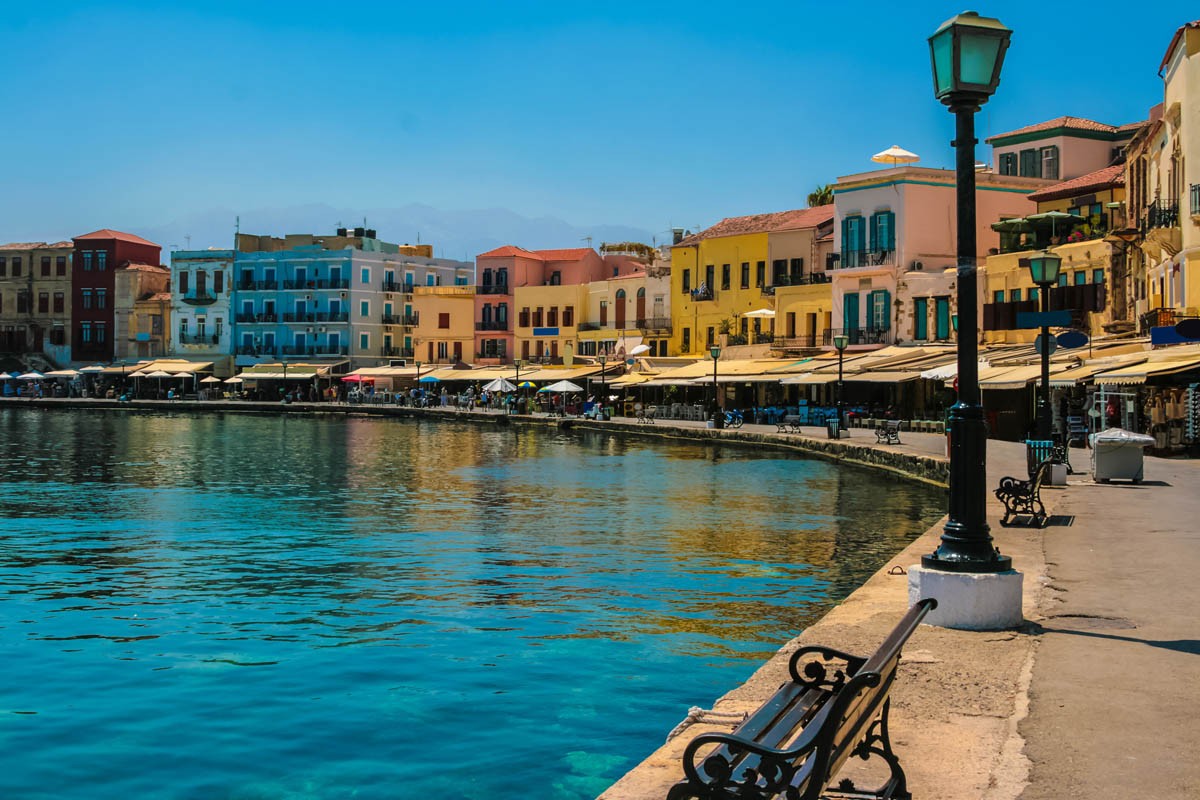 Going west we leave behind the range of Mount Ida (Psiloritis Mountain) and the village of Fodele.

A picturesque little village surrounded by rich orange groves. This is the native village of the family of Theotokopoulos who’s member was the great painter Dominicos Theotokopoulos, or “El Greco” (1545-1614). The painter himself was born in the city of Heraklion. A short visit is always recommended. We continue westwards from Heraklion and we pass to the lovely coastal settlement of Bali, built on a picturesque little bay. After a nice drive we will arrive at Agia Triada (Holy Trinity) Monastery. This is situated at Akrotiri, a location planted with olive groves, vineyards and cypress trees. Architecturally it is one of the most important examples of the Cretan Renaissance. According to tradition it was funded by brothers Jeremiah and Lorenzo of the old Venetian family of the Zagaroloi, who were monks in the nearby monastery of Guverneto. The land owners of Akrotiri offered extensive areas for building the new monastery and Jeremiah travelled to Mt. Athos to copy the construction plans for the new monastery. During the Greek Liberation Revolution of 1821, the Ottomans burnt down the building, which was deserted for a few years, and during that period the documents kept in its archives were lost. The monastery was renovated in 1830. In 1892 the Church School (Ierodidaskaleion), which trained famous priests and teachers, was also erected here and in 1930 it evolved into a seminary (Ieratiki Scholi). The Holy Trinity (Agia Triada) Monastery is probably the most impressive monastic complex of the final period of Venetian rule on Crete, due to both its scale and architectural form. It combines elements of the Orthodox monastic style with western architectural forms and this reflects the spirit of convergence of the two dogmas on the island of Crete. The fortress-like complex forms a huge rectangle with an impressive Catholicon church in the centre and two small chapels, in the styleof Orthodox monasteries. Its prevailing features are austere symmetry and use of classic antiquity forms. The small museum displays relatively few heirlooms rescued from the continued historical adventures of the monastery, mainly icons, vestments, holy utensils, a few manuscripts, incunabula and official documents. Continuing west after a short drive we arrive at the beautiful city of Chania. Chania (also spelled: Haniá) is the capital city, a place where different civilizations have flourished throughout the centuries. Wandering around the Old Town’s maze-like alleys with the beautiful Venetian mansions, the fountains and the elaborate churches will help you discover well-preserved historical monuments. The city of Chania is built on the area of Minoan Kidonia, at the end of the homonym gulf between Akrotiri and Onicha peninsulas. It is one of the most beautiful and picturesque cities in Greece and for food lovers, it's a paradise!

Get familiar with the city of Chania by wandering around in its streets, visiting its museums and admiring the different architectural styles presenting the historical route of the city. After Arabs and Byzantines, it was conquered by Venetians in 1252 and was given to Turks in 1669, later it was annexed to the rest of the Greek State on December 1913 under the administration of Eleftherios Venizelos and King Konstantinos the 1st. The old town is an integral settlement with visible boundaries set by the Venetian walls surrounding it. The old town is built around the Venetian port and is also a relatively integral area where Venetian buildings and later Turkish elements compose a unique architectural style. Due to the historic center of Chania with its Venetian walls defining the borders between the old and new city and its ramparts, the city has been pronounced as preserved. It consists of five connected districts surrounding the Venetian port. The famous Lighthouse is located at the end of the rock protecting the port from the north. It was built in 1570 by the Venetians and reconstructed in 1830 by the Egyptians and from there on preserves its current state. In Chalides Street, you will see the Folklore Museum of Chania and Aghios Fragkiskos church (14th century) which houses the Archeological Museum of Chania. On the north side is the Turkish bath (chamam). In the south side of Ovraika and on Skridlof Street lies the so called Stivanadika (from stivani, the Cretan boots). Among the shops selling leather items and souvenirs survive some traditional shoe ateliers.

• The Archaeological Museum of Chania contains important finds from the excavations in the Chania region and the whole of western Crete, dating from the Neolithic to the Roman period.

• In the Chania Naval Museum are exhibited models of ships from antiquity to modern times and relics from the historic battles of the Greek Navy.

• Many different options can be included in the basic program if requested, like: The Ally War Cemetery in Souda etc