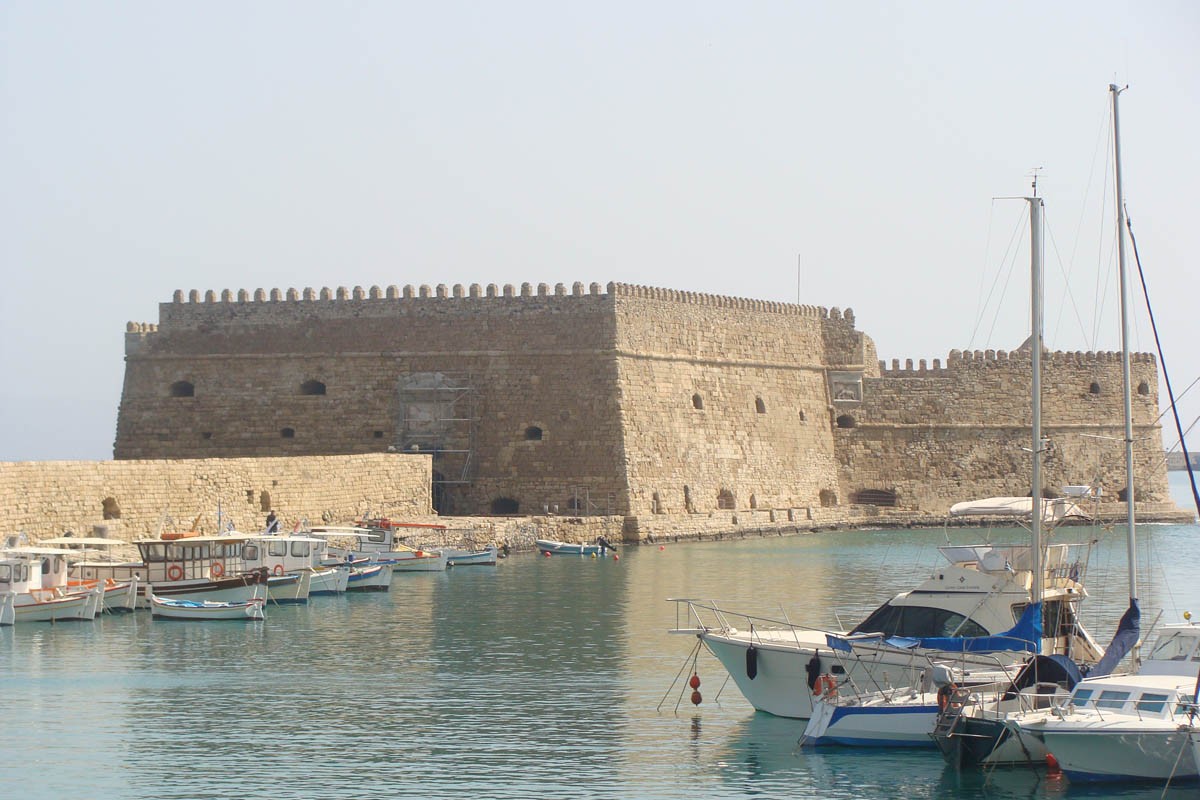 Knossos is the site of the most important and better known palace of Minoan civilization.

According to tradition, it was the seat of the legendary king Minos. The Palace is also connected with thrilling legends, such as the myth of the Labyrinth with the Minotaur, and the story of Daidalos and Icaros.

The site was continuously inhabited from the Neolithic period (7000-3000 B.C.) until Roman times.  The Linear B tablets (Mycenaean script) of the 14th century B.C. mention the city as ko-no-so. Intensive habitation occurred mostly in the Minoan period, when the so-called first (19th-17th centuries B.C.) and second palaces (16th-14th centuries B.C.) were built along with luxurious houses, a hospice and various other structures. After its partial destruction in 1450 B.C., Knossos was settled by Mycenaean’s from the Greek Mainland.

The city flourished again during the Hellenistic period (sanctuaries of Glaukos, Demeter, other sanctuaries, chamber tombs, north cemetery, and defensive towers) and in 67 B.C. it was captured by the Roman Quintus Caecilius Metelus Creticus. The "Villa of Dionysos", a private house with splendid mosaics was built in the same period.

Knossos was discovered in 1878 by Minos Kalokairinos. Arthur Evans conducted systematic excavations at the site between 1900 and 1931, bringing to light the palace, a large section of the Minoan city, and the cemeteries. Since then, the site and the surrounding area have been excavated by the British School of Archaeology at Athens and the 23rd E.P.C.A.

The restoration of the palace to its present form was carried out by Arthur Evans. The interventions were mostly imposed by the need to preserve the monuments uncovered.

The New Archaeological Museum is one of the most important and richest of Greek museums and holds a significant place among the list of the greatest museums in the world. Its 20 rooms house a wealth of exhibits originating exclusively from Crete and related to the island’s past (from Neolithic to Roman times). Unique are the finds from excavation at Knossos, Phaestos, Agia Triada, Malia and other Minoan centers of central Crete. It is located in the center of Heraklion town.

Heraklion City is built on the site of the small harbor which was the seaport of Knossos. This small harbor much later became an important fortified town under the Arabs, who held it for a period of over one hundred years (824-961 AD). During the period of Venetian rule (1204-1699) it was called Candia, a name which eventually came to cover the entire island. This was a period of prosperity for the town, which was fortified by its occupiers with another strong wall, was adorned with a great number of splendid buildings, fountains, squares, and churches, and a time during which the arts and literature also flourished. Then also 21 years of close siege, the town finally surrenders to its new conquerors that, this time, came from the East: Τhe Turks (1669). In 1913, Heraklion was incorporated into the free Greek State, together with the rest of Crete. During the German occupation its inhabitants organized a brave resistance movement together with the other Cretan patriots.

Heraklion is now a modern town (the largest of the island) and is the administrative, commercial, industrial and agricultural center of Crete.

Sights that can be visited while in Heraklion city

• The Old Port is on the left of the modern port and during the Venetian period it was an important commercial and military center.

• The Venetian Walls are the most important fortifications of the Venetian period.

• The Castle or Koules was built at the entrance of the Venetian port in order to protect it from raids. It is open to the public and on the top an outdoor theatre has been built. The name Koules is a Turkish name. The Venetians called it Rocca al Mare.

• The Cathedral of St. Titus was initially built by the Byzantines. The Venetians used it as a Catholic Cathedral and the Turks as a mosque. In 1872 it was rebuilt on its old foundations, so that it could again be used as a Greek Orthodox Church.

• The church of St. Mark was built by the Venetians and it is used today as a Literary Institute, as a permanent exhibition hall for copies of Byzantine frescoes and as a concert hall.

• The Loggia is the most elegant of the Venetian buildings of the town. Today it houses the Town Hall.

• The Metropolitan Church of St. Minas is an impressive and one of the largest churches in Greece.

• The Morosini Fountain constituted the center of Venetian Candia. The fountain has a central basin, resting on the backs of four lions.

• The Bembo Fountain in Kornaros square is the oldest fountain to have survived.

• The Municipal Market is a picturesque part of the modern Cretan town. An outdoor market, offering in plenty all kinds of goods, market produce, fruit, nuts, herbs, spices, meats, cheeses and souvenirs.

• The Historical Museum of Crete is also located in the town of Heraklion with exhibits dating from the Byzantine period to the present. It also includes important historical documents and items of popular art. In addition, Old-Christian, Byzantine and Venetian finds as well as Turkish documents provide invaluable information about the history of the island. Recently the museum acquired a miniature model of the town of Heraklion as it existed during the Venetian rule. This model is exhibited in a specially arranged hall. The museum also houses “Mount Sinai” by El Greco.

• The Natural History Museum of Crete offers the visitor a unique chance of a rich experience of the natural environment of Crete. In a suitable exhibition area of 800 sq. m., with realistic models of biotopes, animal, and plant collections, as well as plenty of photographic material, the visitor discovers the natural beauty of Crete and mainland Greece.

• The entrance fees in all sites are not included in our offer and our guests have to pay them directly.

• Many different options can be included in the basic program if requested like: The Historical Museum, the Natural History Museum, the Traditional Village of Arolithos etc

• We can organize for you a tasting of local products in a family run shop, or try Bougatsa (Greek sweet) or loukoumades (Cretan donuts) in one of the oldest cafes of the city.

• Please feel free to contact us in order to give you our detailed offer, create a unique tailor made program according to your exact needs and requirements from your hotel of accommodation.