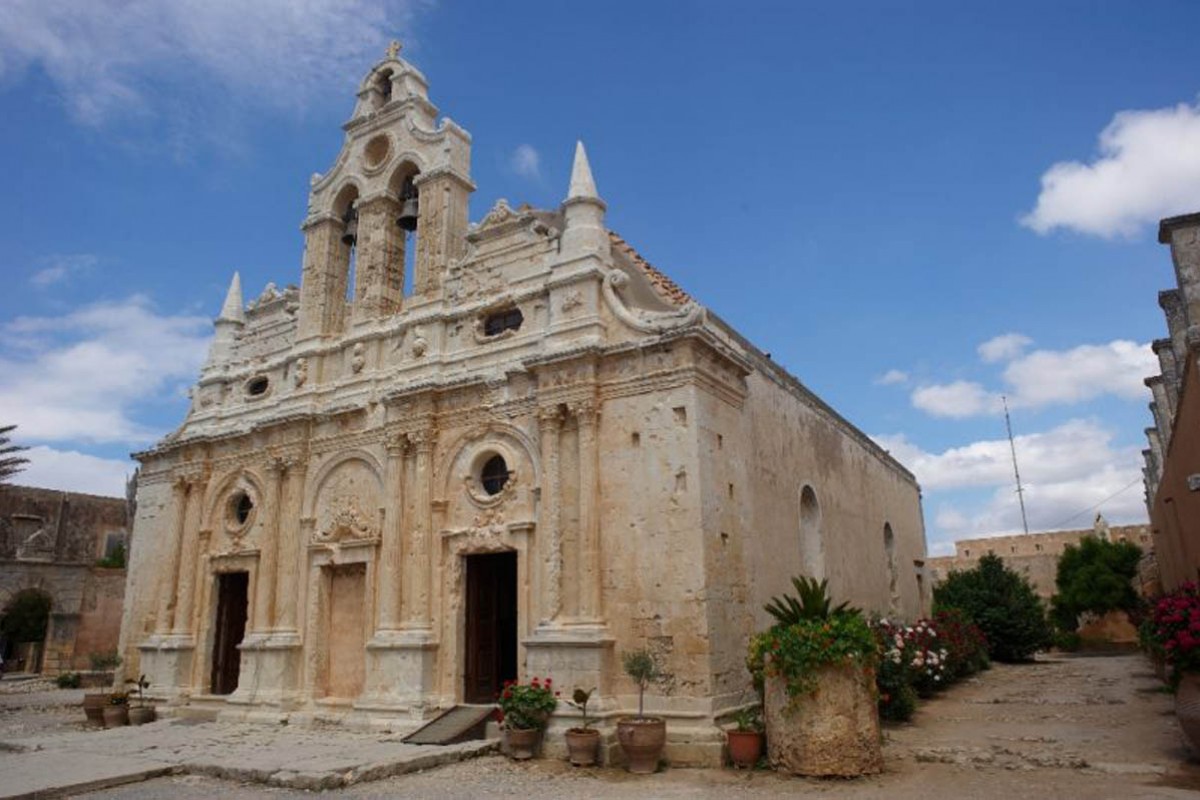 Our first stop will be the historic Monastery of Arkadi, the Cretan symbol of freedom, built on a hill with a magnificent view over the verdant area surrounding it.

The monastery is built like a fortress. It is surrounded by several buildings and its external walls are 1.2 m. thick. Almost at the center of the precinct stands the monastery church. The church with its two naves was built in 1587 and its architectural style is a mixture of Renaissance, Gothic, Classical and Baroque elements. After the Greek War of Independence of 1821, many Cretan guerilla fighters who were being hunted by the Turks took refuge in the monastery. On November 7th, 1866, a Turkish force of 15.000 men besieged the monastery, and its leader demanded of Abbot Gabriel to surrender the members of the revolutionary committee who were gathered there. At that time apart from the members of the committee, 300 armed men and 600 or so women and children had also taken refuge in the monastery. When the Abbot refused, the Turks opened fire. Those entrenched in the monastery resisted fiercely for two days, but on November 9th, their resistance weakened and in order not to surrender to the enemy, the fighters set fire to the powder magazines. In the explosion, all those in the monastery were killed and, with them, many Turks who had in the meantime forced their way into the monastery. The “Arkadi holocaust”, as this heroic sacrifice came to be called, is a landmark of immense importance in the history of the struggle of the Cretan people for freedom. After our visit in Arkadi we will continue to the city of Rethymno which is the most representative sample of a Cretan Renaissance city. Rethymnon is the third largest city of Crete, built on the site of ancient Rithymna (4-5th century BC). After the Byzantine era, Rethymnon was fortified and further strengthened by the Venetians. The old town is one of the nicest attractions for visitors to Crete, who have the ability to roam in the past. The town with the quaint streets and the beautiful monuments reserves its Venetian and Ottoman hues, as it was not altered by the modern era. In contrast to Heraklion and Chania, Rethymnon preserved mainly a Greek Renaissance character, as most nobles during the Venetian Period were Greeks. Near the old town with the narrow streets, the visitor shall visit the largest fortress in Crete, the majestic Fortezza. Other attractions include the small Venetian harbor with the lighthouse, Venetian Loggia, Rimondi Fountain, Rethymno Park, Nerantza Mosque, St. Francis Basilica, Great Gate (Porta Guora), Mosque of Kara Musa Pasha etc.

• The Museum of ancient Eleutherna, the first archaeological site museum in Crete, although smaller in size, is similar to those of Olympia, Delphi, and Vergina. The museum was created to house the results of the excavations carried out for thirty years in the ancient city of Eleutherna.

• The Archaeological Museum of Rethymno contains important finds from the excavations in the region of Rethymno and western Crete, dating from the Neolithic to the Roman period.

• Many different options can be included in the basic program if requested, like: the archaeological site of Eleutherna, the Archaeological museum of Rethymno etc

• Optional visit in one of the oldest pastry shops in Greece where they still make handmade pastry leaf for Greek syrup sweets.