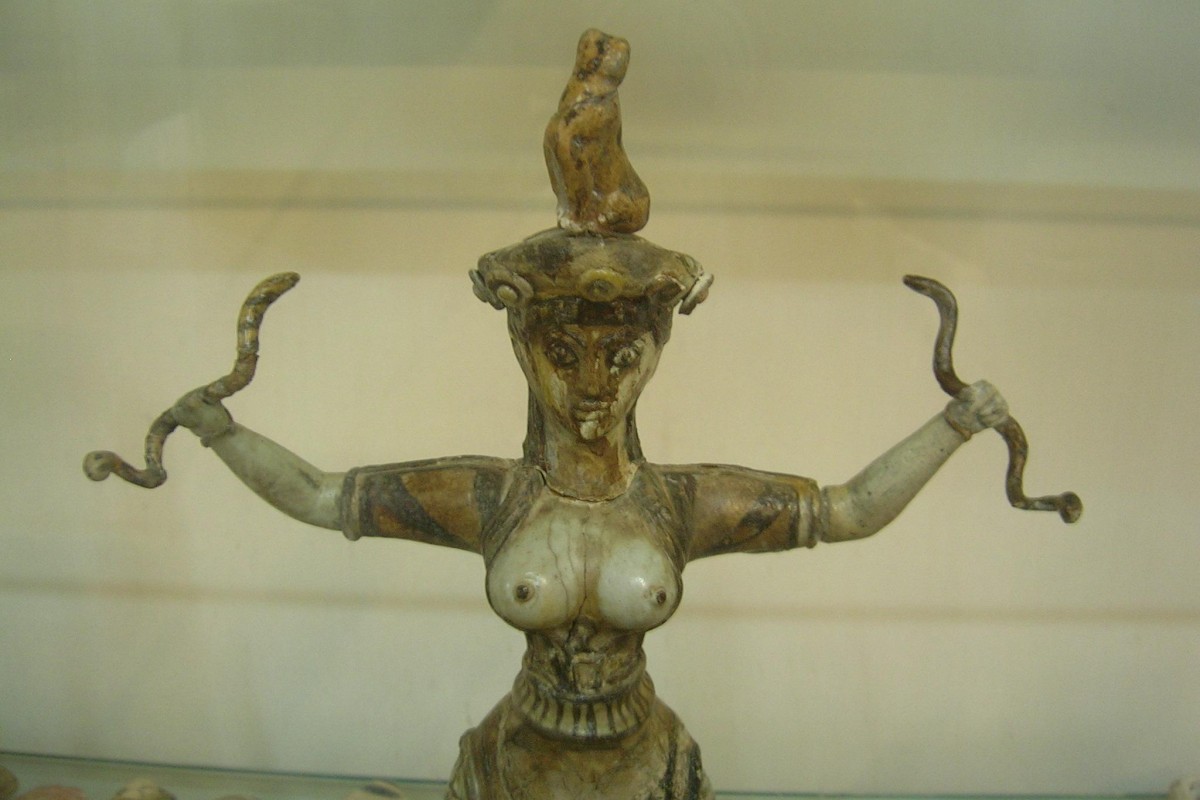 The Archaelogical Museum of the Minoan Civilisation of Heraklion par excellence owes its foundation to the leading figures of Minoan Archaeology, I. Chatzidakis and S. Xanthoudides. The first building that housed the antiquities of the island was constructed between 1904-1912 on the remaining ruins of the Venetian monastery of Saint Francis, next to the Chounkiar Mosque. The museum building, is a typical example of the 19th century neoclassical architecture, was designed by the German architect W. Doerpfeld and the then General Secretary of the Athens Archaeological Society P. Kavadias. The construction of the contemporary museum began in 1937, but it was interrupted by the Second World War, when priority shifted to the rescuing of the antiquities. The museum finally opened in the early `50s and by 1964 the first major extension of the building had been already completed. After a very big renovation that lasted many years , knowdays visitors may see the most important artifacts of the museum collections from all over Crete.

In the Archaeological Museum of Heraklion are housed the findings of the major excavations conducted in the island since 1900, focused initially on the palatial complexes. On top of that the museum collections were largely enriched with antiquities that are found from all over Crete, as the archaeological activity continues without interruption throughout the century, investigating settlements, cemeteries and sacred caves. Making the Archaeological Museum of Heraklion today the largest and most significant collection of Minoan antiquities worldwide. The exhibits outline the history and the most important aspects of the Cretan civilization from the dawn of the Neolithic era in the 7th millenium BC until the end of the Roman antiquity in the 4th century AD.

Among the most important exhibits of the Minoan Collection are:

• The small Snake Goddess figurine. (ca. 1600 BC.) From the palace of Knossos. Faience figurine of the chthonic Minoan deity. Typical features of these religious figurines are the upraised or stretched arms wielding the crawling snakes, the thin-waisted bodice which left the breasts bare, and the characteristic, flounced skirt with the apron. These figurines are outstanding examples of the neopalatial miniature sculpture.

• Rock – Crystal Rhyton. (ca. 1500 BC.) From the palace of Zakros. Small ritual libation vessel. The body is carved from a large core of rock-crystal and the handle is made of crystal beads threaded on a bronze wire. This unique vessel was restored from hundreds of small fragments.

• Rhyton in the shape of Bull’s head. (ca 1550-1500 BC.) From the palace of Knossos. The vessel is made of black steatite, the details of the head are incised, the eyes are inlaid with rock-crystal and jasper, the muzzle is inlaid with white shell (mother-of-pearl) and the horns, now restored, were made of gilded wood. An outstanding example of the skill of the Minoan lapidaries.

• The Disc of Phaistos. (ca 17th century BC.) From the palace of Phaistos. Clay disc that bears on both sides 242 signs, impressed with sealstones. The text runs in a spiral form starting from the edge towards the centre. The signs belong to an ideographic and probably syllabic script, which has not yet been deciphered despite the numerous attempts over the years.

• The “Bull leaper’s fresco”. (ca. 1550 BC.) From the palace of Knossos. The wall-painting bears a representation of the bull-leaping, a kind of contest or sport, probably of a religious character, in which both men and women took part. A man is shown jumping over the back of a bull with a female figure on each side. Numerous representations of this ritual sport are known in Minoan art, among them the bull-leaper figurine, made of ivory and also found in the palace of Knossos.

• The Golden ring from Isopata. (ca 1600-1400 BC.) It was found in a tomb at Isopata, in the vicinity of palace Knossos. The golden signet ring depicts women in ecstatic ritual dance, in a meadow with lilies. The smaller figure is considered to be a goddess descending from the sky. On the ground, the signs of an eye and snakes can also be seen. A true masterpiece of Minoan goldwork.

• The Ring with a scene of three worship. (ca 1600-1500 BC.) From the necropolis of Phourni at Archanes. This golden signet ring was placed on the chest of a deceased woman. The iconography on these artefacts is a valuable source of knowledge about the Minoan religion. The ring from Phourni bears on its tiny bezel a unique scene of Minoan worship. At the centre, is a strong-looking female figure, possibly a goddess or priestess, wearing an opulent dress and raising her right hand in a gesture of benediction. This may be an epiphany of the Minoan goddess, also known from other similar representations. To her left is a young vigorous man who touches or pulls out a tree from within a walled tripartite shrine. At the other end of the composition is a second man who kneels in lamentation and holds an object, possibly a funerary pithos. This dramatic scene is interpreted as a representation of the human life cycle, a basic feature of Minoan worship. A chrysalis, two butterflies, a sacred eye and a column of the Egyptian god Osiris complete the composition.

• The “Bee Pendant”. (ca. 1700 BC). From Chrysolakkos of Malia. Golden jewel in the form of two bees or wasps which are depicted storing away a drop of honey in a comb. This is one of the most famous Minoan artefacts. The technique of minute granulation, which allows fine details to be depicted, and the naturalistic style still compel admiration today. A masterpiece of the Protopalatial Minoan jewelry.