The Monastery of Arkadi 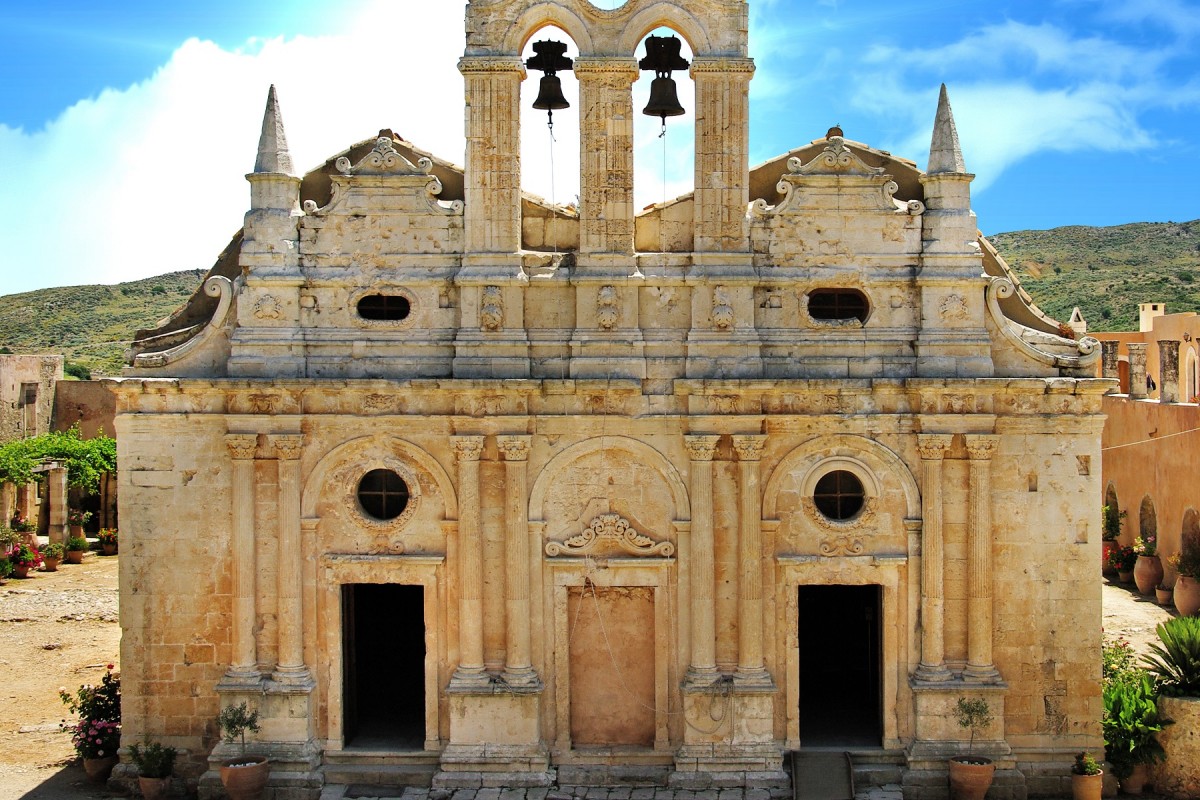 The Arkadi Monastery is located near the village Amnatos, 23km east of Rethymno. It is built at an altitude of 500m, on a fertile plateau with olive groves, vineyards, pine, cypress and oak trees.  The exact date of the foundation of the monastery is not yet known, but it is believed that it was actually founded by Byzantine Emperor Arkadios in the 12th century. According to another version, it was named after a monk called Arkadios, who first founded the monastery. Moreover, the monastery was called Tsanli Manastir by the Turks (i.e. beneficiary bell), as the Arkadi monastery was the only Cretan monastery that had the right to ring its bells. The initial church of the monastery was dedicated to Saint Constantine and some ruins of it are preserved in the northwestern part of the monastery enclosure. Arkadi is surrounded by massif walls that made it impregnable from the enemies and its rich fortification attracted the rebellious Cretans. Many Turkish and Greek documents are referring to the life and the adventures of the monastery, that provided educational, national, ethical and monetary support for the locals. Arkadi is certainly the most historic monastery of Crete and has become the most sacred symbol of the Struggle of the Cretans for Freedom. It is the theater of the tragic battle of 1866, which opened the way for the liberation of the island in 1898 from the Ottoman occupation. Indeed, UNESCO has designated Arkadi as a European Freedom Monument.

THE BATTLE OF ARKADI

12th century: The Byzantine Emperor Arcadius rebuils the Monastery of Arkadi in the area owned by Kalergis family.

14th century: The church of Saint Constantine is built, which is now ruined.

1587: Monks and bothers Klimis and Visarionas Hortatzis renovate the monastery of Arkadi and build the present magnificent temple.

1645: The Turks occupy the town of Rethymno and the monks find refuge in the Monastery Vrontisi, except two of them who are massacred. The monastery gets looted and destroyed. The abbot of the monastery manages later to distract the privilege of ringing the bell, something forbidden for all other monasteries of Crete.

1658: Mustafa Pasha prohibits bell ringing, but the abbot indicated the permission of the Great Gate and Arkadi is excluded again.

1670: The magnificent dining room of the monastery is built.

1822: Yentim Ali occupies the monastery, but it soon re-conquered by the Rebels and most Turks are killed.

1831-1841: During the brief ten-year Egyptian Era, the monastery flourishes.

7-9 November 1866: The battle of Arkadi, one of the most tragic events of European history.

1870: The ruined monastery is restored.

1933: Timotheos Veneris founds the museum with the historical relics of the monastery.