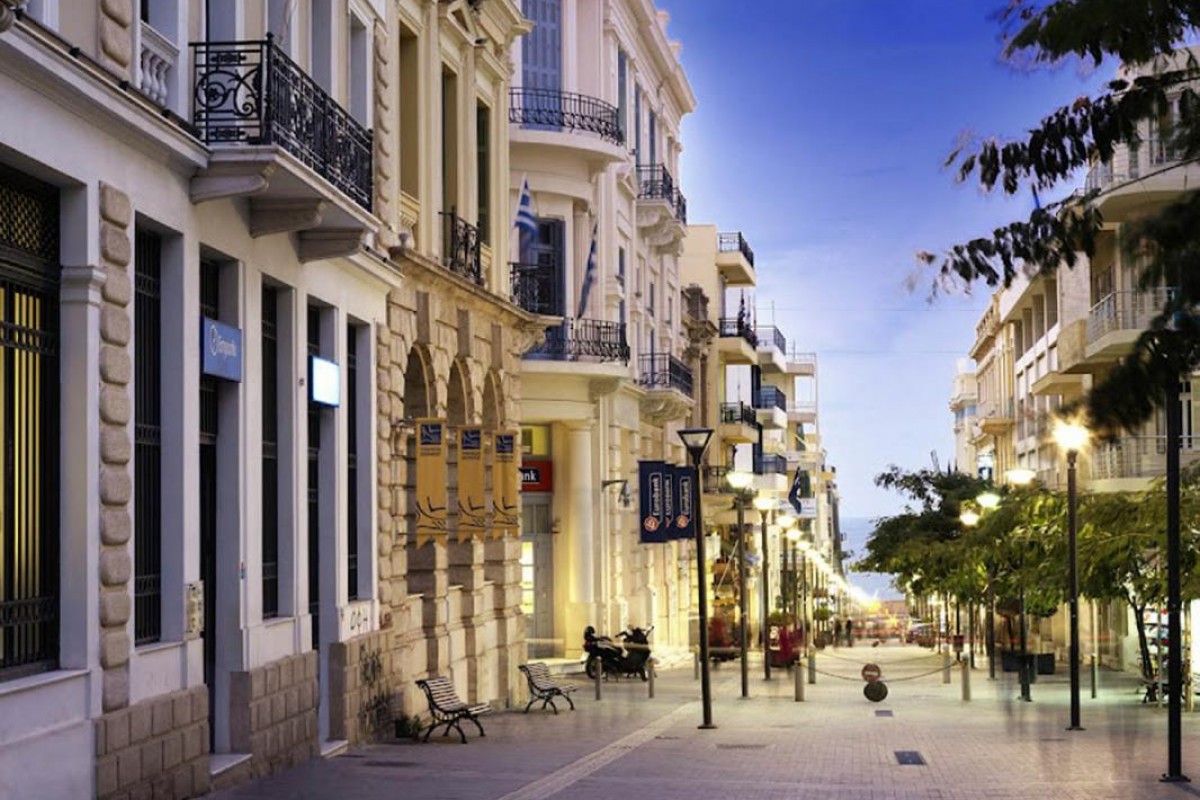 Our day will start at Boutari Winery, one of the most modern wineries in Crete. The winery invites you to take part in its tours and get to know the world and the secrets of wine along with the experts.

The facilities are located in Skalani area on Fantaxometocho Estate, just 8 km from the centre of Heraklion and 4 km from the archaeological site of Knossos, in the private Boutari vineyard. There, you can choose the duration of the tour and the services that interest you. An integrated tour includes a tour of the estate's vineyards and winery facilities, where you will find a rich cellar –here the wines of the estate are aged– and the special projection room for a unique journey back in time to the history of Crete, through an impressive audio-visual experience. The resident Boutari oenologist offers a basic course on wine tasting, during which you can explore this mystical art through all their senses, accompanied by local flavors. Continuing we will drive until Arhanes which is a picturesque small town, built at an altitude of 380 meters [1280 ft] in the middle of a basin. The greater area of Arhanes is most significant for its numerous archaeological sites. The colorful village has been prized by the European Union as model for residential development. You could visit the museums of the town and discover the region's history through the findings of the Minoan and Byzantine Era and the folk art exhibits. Also many wonderful architectural buildings and Byzantine churches affirm the designation of Arhanes as an ideal traditional settlement. Visit the various restaurants and taverns at the central square to discover the world famous Cretan cuisine or the exquisite Arhanes wines. Discover the methods the people of yester Crete used to produce their precious products, wine and olive oil, by visiting the traditional olive and wine presses. It is not surprising that the oldest wine press in the world has been found in Arhanes. And in the background the sacred mountain, Jioukta, where according to ancient mythology, Zeus, the father of Gods and Humans has been buried. After our visit in Archanes we will finish our day at the capital, Heraklion city. Heraklion is the largest city of Crete and one of Greece’s major urban centers. Its development begun in the wake of the 9th century AD (in antiquity, Knossos was the island’s most important center, followed by Gortyn). In later times, Heraklion came under Arabic, Venetian and Ottoman rule; its conquerors initially gave it the name Khandaq or Handak which was corrupted to Candia. During the 2004 Olympic Games, the city of Heraklion provided one of the venues for the football tournament. Among the most outstanding sights of Heraklion are the fortification walls that delimit the “old city”. The first fortifications were built by the Arabs and were later reinforced by the Venetians (15th century). From the seven bastions, only the Martinengo bastion survives to this day; there visitors will find the tomb of the renowned writer N. Kazantzakis, overlooking the city. From the four gates to the city, only Chanioporta (1570) with the characteristic winged Lion of Saint Marc and the New Gate (1587) at the southern side survive today. In the old (Venetian) port, next to the modern facilities, one can see the vaulted tarsanades where ships used to be built, while the western side is dominated by the Koule fortress (16thcentury). In the heart of the city there are many monuments dating to the Middle Ages, a period in which Heraklion witnessed great prosperity. From the port, ascending 25 Avgoustou (August) street, one reaches a square where the Cathedral church of Agios Titos is found (built in 1872 at the site where a Byzantine church once stood), while next to it lies the Venetian Loggia (16th century), a magnificent, ornate arcaded Venetian building decorated with blazons, trophies, etc., which served as a meeting place for the Duke and other noblemen during the Venetian period. A typical feature of Heraklion is its Venetian and Turkish fountains, scattered all around the city. The most famous one is the Venetian-style Μorozini Fountain, also known as the Lions fountain (1628), a landmark for local inhabitants and visitors alike. Other noteworthy Venetian fountains are the Bembo fountain (1552-1554) on Kornaros Square, the Sagredo fountain (1602-1604) built in the northwestern corner of the Loggia, and Priuli fountain (1666) located near the port. The most interesting Turkish fountains are the Charity fountain (1776), next to the Bembo fountain, which today functions as a café, the “Idomeneas fountain” (behind the Historical Museum of Crete), the “Genitsar Aga Fountain” (on Ikarou street), etc. Among the churches of Heraklion the one that stands out is the imposing and sizeable Metropolis of Agios Minas (on Agia Ekaterini Square), built between 1862-1895. Adjacent to it, stands the chapel of Mikros Agios Minas and on the northeast is situated the church of Agia Ekaterini (16th century), which functions as a museum housing exhibits from the Cretan Renaissance. The church of Agios Markos (13th century) towers over Venizelou Square, while other important churches in the city are the Monastery of Agios Petros and Pavlos, the Panagia Akrotiriani, the Panagia ton Stavroforon, etc. In the market of Heraklion, one of the richest in the Mediterranean, visitors can find all sorts of modern products, as well as traditional Cretan products such the famous Cretan olive oil, raki, local wine, honey, herbs, etc.

Sights that can be visited while in Heraklion city

• The Old Port is on the left of the modern port and during the Venetian period it was an important commercial and military center.

• The Venetian Walls are the most important fortifications of the Venetian period.

• The Castle or Koules was built at the entrance of the Venetian port in order to protect it from raids. It is open to the public and on the top an outdoor theatre has been built. The name Koules is a Turkish name. The Venetians called it Rocca al Mare.

• The Cathedral of St. Titus was initially built by the Byzantines. The Venetians used it as a Catholic Cathedral and the Turks as a mosque. In 1872 it was rebuilt on its old foundations, so that it could again be used as a Greek Orthodox Church.

• The church of St. Mark was built by the Venetians and it is used today as a Literary Institute, as a permanent exhibition hall for copies of Byzantine frescoes and as a concert hall.

• The Loggia is the most elegant of the Venetian buildings of the town. Today it houses the Town Hall.

• The Metropolitan Church of St. Minas is an impressive and one of the largest churches in Greece.

• The Morosini Fountain constituted the center of Venetian Candia. The fountain has a central basin, resting on the backs of four lions.

• The Bembo Fountain in Kornaros square is the oldest fountain to have survived.

• The Municipal Market is a picturesque part of the modern Cretan town. An outdoor market, offering in plenty all kinds of goods, market produce, fruit, nuts, herbs, spices, meats, cheeses and souvenirs.

Most of the finds are in the archaeological museum of Heraklion but the successful way in which the finds and the copies are displayed, gives the visitor a good image of life in Minoan Crete.

• The Historical Museum of Crete is also located in the town of Heraklion with exhibits dating from the Byzantine period to the present. It also includes important historical documents and items of popular art. In addition, Old-Christian, Byzantine and Venetian finds as well as Turkish documents provide invaluable information about the history of the island. Recently the museum acquired a miniature model of the town of Heraklion as it existed during the Venetian rule. This model is exhibited in a specially arranged hall. The museum also houses “Mount Sinai” by El Greco.

• The Natural History Museum of Crete offers the visitor a unique chance of a rich experience of the natural environment of Crete. In a suitable exhibition area of 800 sq. m., with realistic models of biotopes, animal, and plant collections, as well as plenty of photographic material, the visitor discovers the natural beauty of Crete and mainland Greece.

• The New Archaeological Museum is one of the most important and richest of Greek museums and holds a significant place among the list of the greatest museums in the world. Its 20 rooms house a wealth of exhibits originating exclusively from Crete and related to the island’s past (from Neolithic to Roman times). Unique are the finds from excavation at Knossos, Phaestos, Agia Triada, Malia and other Minoan centers of central Crete. It is located in the center of Heraklion town.

• The tour, the multimedia presentation and the wine tasting in Boutari winery will be covered directly from the guests.

• We can organize for you a tasting of local products in a family run shop, or try Bougatsa (Greek sweet) or loukoumades (Cretan donuts) in one of the oldest cafes of the city.

• Please feel free to contact us in order to give you our detailed offer, create a unique tailor made program according to your exact needs and requirements from your hotel of accommodation.